The rolling hillside architecture of Nicaragua

When we take a look at the hillside in the valley, we often think of the pre-Columbian people who once lived on that hillside and the valley was their ocean.  It is all evident by the artifacts which have been discovered there.

Was the design concept of Casa de Cooper and Pelican resort a dream coming from the rolling hillside or was it something from the history of the 16th Century culture or even a touch of the adobe style of building in the pre-Columbian days in this area?

an Architect from Barcelona in Spain.  Gaudi was well known for making houses with curving organic form – inside and out.

Perhaps it was none of this,  just an inspirational design with all of the concepts over the years of study in Spain and building in Nicaragua.  However, I feel confident Gaudi had an influence from his impressive showcases at the 1888 World’s Fair.  Our Architect, by the way, studied in Barcelona.

Casa de Cooper and Pelican is built with “no straight lines”

The theme was to not have straight lines or as few as possible.  The architect 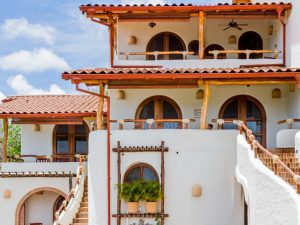 wanted us to meet the culture and nature of Nicaragua through the conception of this awesome no straight lines design. The team wanted Casa de Cooper to represent not only the Culture but give an experience of a design which would depict the older culture of the pre-Columbian era and the 16th century with adobe finishes and a lot of wood railing.  This is where Nicaragua began and you can meet the Culture of the Country here.

You will get a feel of all this from your first arrival at Casa de Cooper. You will not only notice the delightful feel of the design with all the teak wood railings, high ceilings, large balconies and views that will display the wonders of Nicaragua from sea to a working cow ranch to the North.  Even our new 30-bed hospital is a speck in your viewing.

If our architect would have applied the rule of a straight line to the building, you would not have the splendid feel and comfort of the interior walls of your Villa. An art within itself.  Think about the added features of the doors with rounded tops of the screen doors and rounded frames of the windows all with screens to prevent the flies and other insects from entering your Villa.  An opportunity to rest with the warm and sometimes cool breezes from the Island of Ometepe without air-conditioning.

Even the stairs and entrances carry the theme of the culture with “no straight lines” continuing with exposing you to the country.  The replicated statues of the pre-Columbian days add to the story of Casa de Cooper meeting Culture along with the local fine artwork.